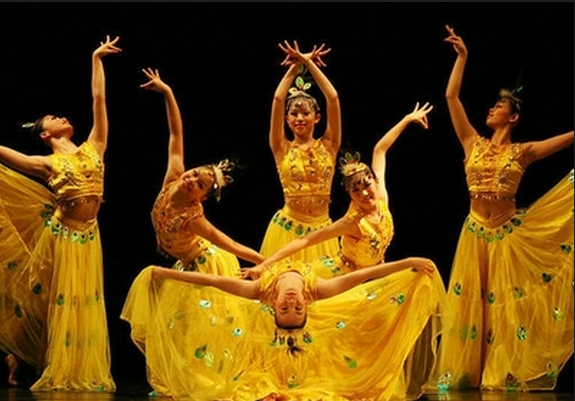 China has 56 ethnic minorities, each of which has a culture that is characterized by, among other features, a set of unique folk dances. Since each ethnic group's folk dances reflect the peculiarities of that group's religious, cultural and historical narrative, as it were, the dances – their choreography and their colorful costumes – naturally relect this ethnic narrative. That said, many of the dances of ethnic minority groups share common themes such as rivalry, jealously and love – but also forgiveness – as well as matrimonial bliss and the communal bond. The communal bond plays an important role in many ethnic dances, and, indeed, one of the main reasons for the ritual performance of these ethnic dances on festive occasion is to reinforce social cohesion among the group. The folk dance is one of the most cherished forms of artistic expression among the Chinese people. In a sense, the folk dance can be interpreted as the simplest and most immediately available form of informal theatre – and indeed, the Chinese folk dance has in many instances successfully made the transition to formal Chinese theatre.

All are welcome to join the Ethnic Minority Folk Dance class with Liu Laoshi to enjoy the fun of Chinese culture.